• Tirana enjoys a beautiful setting between the ranges of Dajti Mountain from one side and the coastal plains on the other one.
• This relatively new city was founded in 1614 by Sulejmen Pashe Bargjini, feudal lord of that time, and proclaimed capital in 1920. However the area has been inhabited as early back as the Neolitic period.
• With a population of approx 800,000 inhabitants, Tirana is growing rapidly, and is a busy commercial and administrative center with several comfortable hotels, restaurants, discos, pubs as well as modern facilities for conventions and conferences. About 70% of the businesses are located in Tirana area.
• It is always nice to have a walk in the Grand Park, lying in the southern part of the city and extending over an area of 250 hectares with an artificial lake included. It has 120 kind of plants, decorative shrubs and flowers of various colors.
• Albania Property Management has a lot of properties for sale or for rent in the city of Tirana. Our agents in the city will be able to help identify great deals for our clients

Saranda – the Pearl of the South 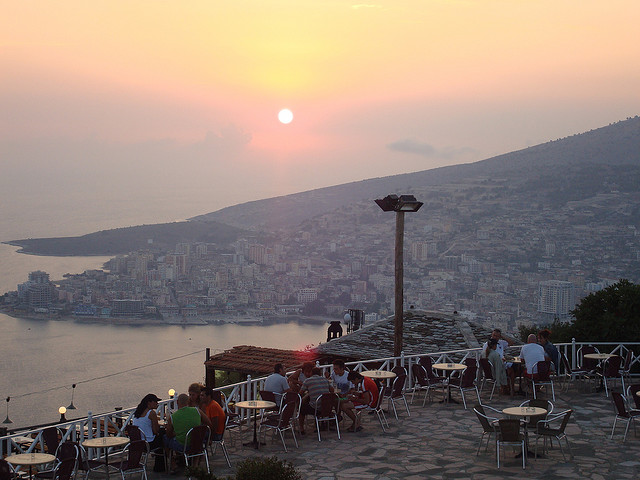 • Seashore of Saranda, offers a unique atmosphere and style that steels the heart of all its visitors.
• The sea panorama, the variety of flora, favored by the soft climate, make Saranda the preferred center for rest and recreation and an important tourist town.
• Most Albanian couples come to spend their honey-moon in Saranda. That’s why it is known in Albania as the town of the honey-mooners.
• Saranda is situated in an open sea gulf, opposite the island of Corfu (Greece). Saranda is an animated town between the mountains and the Ionian Sea,61km south-west of Gjirokastra.
• There are today, daily ferry services to and from Corfu. Saranda is rapidly developing into the southern gateway for tourism into Albania.
• In year 2000 Saranda was visited by 50thousand foreign tourists and many more Albanian tourists.
• Near Saranda stood the ancient Illyrian city of Onchesmos, mentioned as a port in the 1st century B.C.
• In the 4th century A.C.. the town was fortified with walls. Inside the walls have been excavated the remains of dwellings, water cisterns and an early Christian Basilica of the 5th and 6th century, containing a beautiful multicolored floor mosaic.
• Other mosaics are to be found in the district museum. The ruins are also preserved of an early Christian Monastery, of the 40 Saints, from which the modern name of the town (Saranda) is derived.
• Albanian Property Management has an in depth knowledge of the city of Saranda and the best properties for sale. Our office in Saranda will always be there totake care of our clients needs.

• Durres is an ancient city, founded in 627 B.C. and known by the names EPIDAMNUS and later on DYRRACHIUM.
• The most important archaeological site is the Amphitheatre, the largest in the Balkan Peninsula, built in the 2nd century B.C. with a capacity of 15 – 20 thousand
spectators and containing an early Christian Crypt with rare wall mosaics
• Worth visiting is also the fortress of Durres of the early Middle Age, V –VI Centuries
• Durres is the largest beach and sea destination in Albania
• With a coast of 6 km long and 150 –180 meters wide, only 30 km from Tirana
• International Airport and 39 km far from the capital Tirana
• Along the seaside there are tourist establishments which provide adequate services
• Durres is the second largest city of Albania with a population of 150,000 inhabitants which gets almost doubled during the summer!
• It is the biggest seaport and the main railway connection center
• Located in the vicinity of international Airport of Rinas and the capital, Durres maintains regular connections with Italian ports
• Our properties in the city lies mainly on the beach area and it gives our clients the convenience of being close to Tirana International Airport which is only 20 minutes away.

• Vlora coast is situated in the southwestern part of Albania, exactly where the Adriatic and Ionian seas meet
• Vlora, through the Otranto Channel, is the nearest point of Albania to Italy (72km)
• It is also 135 km from Tirana and 123km from Greece
• Along the Vlora coastline you will find outstanding white beaches and stunning surroundings
• Lots of beautiful beaches in places like the natural Park of Llogara, Dhermi, Palasa, Himare and Cold Water (famous for its rich clientele and natural water resources)
• Vlora averages 274 days of sunshine
• Albanian Property Management has several great offers from the city of Vlora. Our contacts on the ground are extensive and this city offers the luxury of being in the middle of the south of Albania. So you are equally close to Saranda or Tirana.