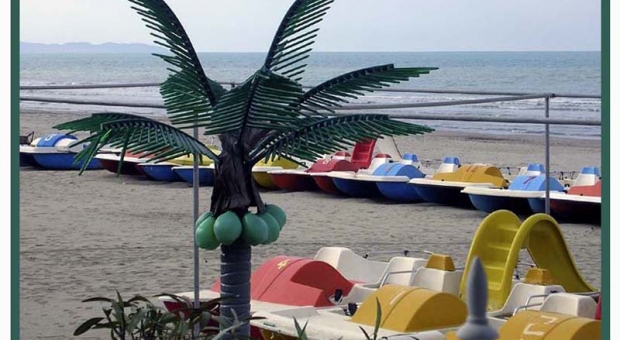 Durres (alb. Durrës), the second largest city of Albania (161,800 inhabitants, 2008 estimate), is the most ancient city and one of the most economically important as the biggest port city. The beaches of Durrës are local hotspots for many Albanians and are an important part of tourism in Albania. The city was colonized by the colonists from Corinth and Korkyra in 627 B.C. It was named Epidamnus, which later became Dyrrachium. Between the 1st and 3rd centuries Durres was an important port and trading centre on the Via Egnatia trading route, between Rome and Byzantium (Istanbul). After a great number of earthquakes, much of ancient Durres sank into the sea or collapsed and was subsequently built over. The most important object is the amphitheatre with 15,000 seats, dating back to the 2nd century AD.

Durres Beach Resort
In the middle ages was Durres coveted by many different intruders from all over Europe. The fact that this city has been inhabited throughout its history, means that very little of the ancient city has been excavated, as it exists under the newer buildings. However the archeological museum is well stocked and presented. The famous Roman orator, Cicero called Durres an admirable city, while the poet Catullus called it the tavern of the Adriatic. Today the city is well known for the beach resort of Durres with sandy beaches and warm sea waters. It is about 10.5 km long and is frequented by Albanian and foreign tourists from May until October.

What to see
City Walls – were built in the reign of Anastasius I and enclosed one of the greatest strongholds of the Balkans. The medieval town of c. 150 ha lay within this circuit. We know from historical sources that in front of the walls there was once a moat and that access to the city was by means of a drawbridge. Free access.

Amphitheatre
Amphitheatre – with a capacity of 15,000 spectators is one of the largest in the Balkans. Its diameter must have been more than 120 metres. It is one of the biggest and most exquisite monuments that have survived from the ancient city. It was built in the 2nd century AD. The gladiatorial and wild beast fights were suppressed in the 4th century; in the 7th century a Christian mortuary chapel with wall-mosaics, dedicated to Saint Asti, the first Bishop and martyr of Durres, was constructed in one of the galleries and the arena became a cemetery.

Roman Thermal Baths – were discovered on 1962. The baths have a hypocaust or heating system and a pool, 7m long by 5m wide. Free access.

Byzantine Forum – was built in the city centre between the 5th and 7th centuries AD. The paved area is 39m in diameter, and is paved in marble. In the middle of this circular space there was probably a statue of the emperor. Free access.

Archaeological Museum – situated near the sea. It houses the largest archaeological collection in Albania. In its display cases are items of the Classical, Hellenistic, Roman, late antique and early medieval periods found in Durres and its surroundings.

Ethnographic Museum – is next to the amphitheatre, in a historic house of the second half of the 19th century. Traditional costumes and other craft items from Durrës and its neighbourhood are on display.

• Durres is the largest beach and sea destination in Albania
• With a coast of 6 km long and 150 –180 meters wide, only 30 km from Tirana
• International Airport and 39 km far from the capital Tirana
• Along the seaside there are tourist establishments which provide adequate services
• Durres is the second largest city of Albania with a population of 150,000 inhabitants which gets almost doubled during the summer!
• It is the biggest seaport and the main railway connection center
• Located in the vicinity of international Airport of Rinas and the capital, Durres maintains regular connections with Italian ports
• Our properties in the city lies mainly on the beach area and it gives our clients the convenience of being close to Tirana International Airport which is only 20 minutes away.

Share "Invest in Durres City – Albania’s most ancient city" via: