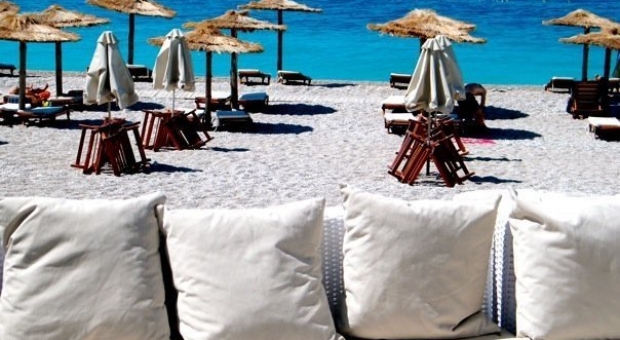 It is a rare city in the world that can have a position that is as conveniently and geo-strategically located as Vlore; which is connected with its immediate entrances to the sea and to the west and at the base of a string of mountains in the east. The western vanguard of the city is the island of Sazan and the peninsula of Karaburun with which Vlore keeps “the key” to the strait of Otranto. Vlore is an ancient city and the southernmost port of the Adriatic. Over 124,000 people live in Vlore. The bay of Vlore is shallow where the depth goes to five meters after one meter from the coast line and ten meters past two kilometers from the coast line. Vlore is in a favored position at the crossroads of the entire region’s water, air, and land, roads.

The distance from the country’s capital, Tirana, is 135 Kilometers, while it is only 72 km. from Italy and 77 miles from Greece. Vlora’s position guarantees a large circulation of local and foreign tourists, who favor the city because of its magnificent beauty. The bay of Vlore is distinguished for its many natural resources, for its pure biodiversity, and ecological corridor. Its is one of the areas with the largest tourism potentials in the area, connected directly with entrances to the sea, with lots of clean nature, climate, water, archeology, history, culture and people and businesses.

The city of Vlore stretches along Uji te Ftohte (the area known as Cold Waters) to the region of Zvernec.  The level on which rises the City of Vlore is from 6 until 76 six meters from sea level and represents a continental base level. Meanwhile the general length of the coastal line is 90 kilometers from the mouth of the river Vjosa until Karaburun, which is declared from the Council of Ministers a zone with advancement for tourism development. Actually, the city of Vlore continues to widen all the way especially strait to the coastline of the city, particularly until Uji te Ftohtes and Jonufre.

The geo-morphological conditions between Narte and Plazhi i Vjeter (The old beach) do not allow quick advancement of the city strait to the coast. This indicates the existence of marsh sectors as well as centers of a weak base of earth. Knowledge of the natural laws of the development of the coastal zone and the provoked changes from the interference of people who comprise today among the main problems for protecting and exploiting their rations.

To see Vlora Property for Sale click on the link below: