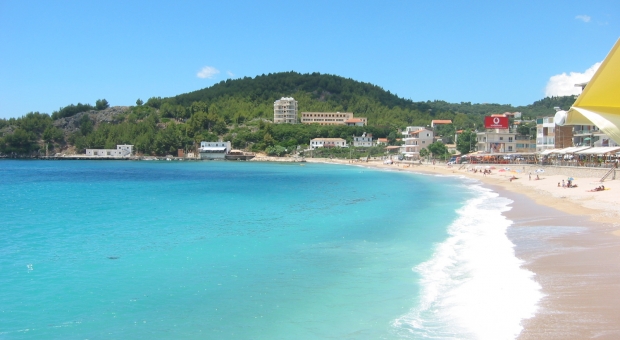 It is a combination of the most interesting landscapes. The road leading to town is entirely mountainous. A good part of her has no contact with the sea and how to approach reappeared Himara the appearance of blue Ionian Sea. The first presentation is with the old Himara and after the severity of the terrain, where there are citrus and olives, lands to its center. However, the country’s antiquity identified with the old part of town, which lies on the hill to the right of the existing city. Preserved traces of the old fortress walls dating back to IV-XVI centuries and is the embodiment of resistance of the inhabitants. Within the walls of the church is a monument of special values. Himara Beach is another point where you can taste the sun in the bathrooms clean coast, sinking into sea blue, or even boating.

The Himara region is characterized by high mountains (~2000 meters), called Llogara (known in antiquity and in Greek as the Ceraunian mountains) falling steeply to the sea. There are long white sandy beaches and the few hills close to the sea are terraced and planted with olive and citrus trees.

Himara, where Dhermi is included, has been inhabited by the Epirote tribe of Chaonians. Philip of Macedonia (father of Alexander the Great) attacked Himara in 214 BC. In 167 B.C., it was a Roman naval base. Julius Caesar was the first great leader that set his foot in the beach near Drimadhes in his battle against Pompeus.For a certain period, Himara was under the Bulgarian rule (904 AD). One relative of Gjin Bua Shpata (Lord of Arta about 1370 AD) came and was established in Dhermi. After the murder of Balsha II (a famous Medieval Albanian landlord) in 1385, his wife “a true amazon” ruled upon Himara till 1392. Those were times of wars with Saracens, evidence of which are the Pirate’s Cave and the place named as Al-Evra.

The famous Norman Guiskard and his son Boemund attempted to subdue the place, recognizing the strategic location upon the Otranto channel. Gjon Kastrioti, the son of Scanderbeg – Albanian National Hero, landed in Himara in 1481 to organize an uprising against the Turks, after the death of his father, which proved unsuccessful. As result of Turkish occupation, many Himariotes left Albania and founded some villages in Southern Italy. Himara, unlike most of the country was never conquered completely by the Turkish. Together with Mirdita, both regions enjoyed a certain degree of autonomy. According to the status signed by Sultan Bajazite II in 1492, Himara and its villages, should pay to the Sublime Port the sum of 16,000 francs per year. However, the region was governed by the local demogeronds. Himara (at that time composed of more than 50 villages) was the center of several uprisings such those in 1481, 1488, 1494-1509, 1537, 1571, 1595, 1690 1713.

Ali Pasha of Yanina was the only Turkish (or Albanian as he was Albanian by the origin) ruler successful of occupying Himara (1797) and her villages. The story tells that he ordered to put the fire on the forest upon the village of Drimadhes. According to the history of Albania, the Suliotes, that were the major contributors for the Greek Independence, were migrated Himariotes.

After the Albanian Independence, Himara was included in the new state, although in March 1914 the region was declared autonomous. In 1927 it was signed the Protocol of Himara between the region and the Albanian state that recognized the privileges of the region. 1930 marks the end of Greek language teaching in Himara.